I have been enjoying and using computers and technology since I learnt about them at school in the 1980s, gaining a Certificate of Extended Education in Technology in 1985 that included a computer studies course using Commodore PET computers.  I purchased my first 48K Oric-1 Micro Computer in 1983.  While my friends were all busy playing games on their ZX Spectrums I was being much more creative typing out programs and using cassette tapes to store them on to create visual displays, electronic posters and music from a program that turned the computer’s keyboard into a synthesizer.

I still have my Oric - it still works!

In 1989 I started using word processors and put my typing skills to good use. My father and I shared the cost of our first Windows 3.1 computer in 1991 and I started using Microsoft Office for the first time. We upgraded to Windows 95 and began using the Internet, with Windows 98 came MSN Messenger and Skype, Windows Millennium Edition (Me) was great fun but kept crashing. Windows XP sorted out all the niggles and became easier to use.  Windows Vista was great but a bit cumbersome, Windows 7 was one of the best. I bought a Windows 8 Tablet, although never saw the need to upgrade my PC to Windows 8 or 8.1  I owned two phones running Windows 8 and 8.1 - everyone else seemed to love their iPhones and Androids but their build quality, cameras and user interface were so weird compared to Windows that is so familiar. I upgraded my PC to Windows 10 as soon as the free upgrade was available and I was soon able to #UpgradeMyWorld so that all my devices - computers, tablet and smartphone (which doubles up as my sat-nav) were all running Windows 10. With the help of Cortana by my side life had never been so simple and easy! Unfortunately Microsoft’s Windows 10 Mobile platform wasn’t popular and so now I have to use Google Assistant instead, but that’s progress.

Windows 10 is the easiest upgrade I have ever experienced, and once a device is configured to your liking it is so intuitive and easy to use compared to older versions of Windows or other operating systems from Google and Apple.

It was with some sorrow, following the removal of the excellent Barclays Banking App and because of other inconsistencies as Microsoft reduced their support for mobile phones that in 2017 I gave up my Microsoft Lumia 830 Windows 10 Mobile phone and bought a Lenovo/Motorola G5 Android instead.  It does the job but the design inconsistencies of Android annoy me so much!  Thankfully Microsoft have made Android a much more enjoyable experience with their amazing Launcher app which synchronises so much with Windows 10, but Cortana is 1/3 as useful on Android as she used to be. 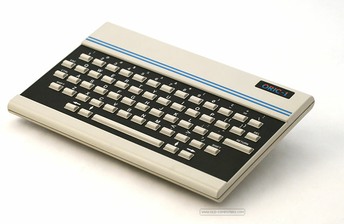 The very first computer I owned (Circa 1983) was an Oric-1 made by UK based Tangerine Computers Ltd. (Yes, before “Apple Computers,” there was another fruit!)

It had 48K (Kilobytes) internal memory, it had to be plugged into a TV to work, it was necessary to type or transfer programs written in the B.A.S.I.C. Language into it to make it work.  Programs were available in books that you could buy to type out, and then later on cassette tape.

The Oric-1 appealed to me because of its simple lines and unusual but very functional keyboard.  It also featured a Roland Synthesizer sound chip and the processing chip that was later the backbone of the BBC B Micro Computer that went into all schools.